I am a certified nutrition coach, so OF COURSE I know that dangers of artificial sweetener. I have studied about all of the negative side effects they bring, the downsides to using them, the long-term effects…but I guess deep-down that I never really believed all of the hype.

Not until I saw it with my own eyes.

Years ago, I was a chronic Splenda user. I used three packs of it in a single cup of coffee. Yes, THREE. Slowly, I weaned myself down to two packs. Then I started mixing Stevia in with the Splenda until I had finally transitioned to using Stevia alone. It has been years since I have bought Splenda or used it in my house.

This past weekend, I traveled to Tulsa for a business conference. I had to fly, so I was very limited on what I could bring with me. I remembered to pack a water bottle, meal replacement shake packets, protein bars…but I forgot the stevia. For five days, I had to resort to using Splenda again. No big deal, right?

Almost instantly, I had severe bloating and just felt “off.” This is no surprise since Splenda reduces the healthy bacteria in your gut by up to 50%. It also increases the amount of pH in your intestines.

I was also hungry all the time. Now, granted everyone that knows me knows that I love to eat (and I can honestly out-eat almost all my friends!), but I was HUNGRY. I was also hungry for unhealthy foods that I wouldn’t normally eat, such as sweets. This is also a side effect of the artificial sweetener. Splenda can stimulate your appetite, increase carbohydrate cravings (hello, cheesecake!), and stimulate fat storage and weight gain.

Lastly, my eyes were swollen and watered the entire time I was there, which was extremely frustrating since I wear contact lenses. I had to resort my pulling out my glasses in the afternoons because I just couldn’t handle the itchy, watery, uncomfortable feeling any longer.  Now that I’m home, it has almost completely stopped.

Artificial sweeteners certainly do live up to the bad rap they have been given. If you have no natural sweetener alternatives, I would highly recommend resorting to sugar before ingesting artificial sweeteners. This pertains to diet sodas as well; if you must have a soda, reach for one that isn’t diet (although I strongly suggest giving them up altogether).

I know that there are others out there that have read the articles, learned the facts, and have done the research, but you also have to “see it to believe it” like I did. I hope that my experience with this will open your eyes and show that it just isn’t worth it to cut corners with your health.

I will be honest and admit that after being spoiled with a seven-day, all-inclusive honeymoon in Jamaica with unlimited food options readily available, it is definitely not easy getting back into the swing of meal prepping. 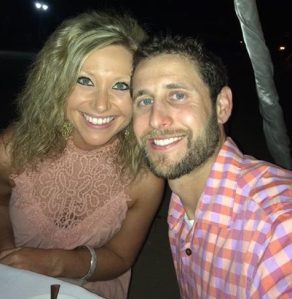 That is exactly why I am thankful for Prep Dish! Not only has it helped me tremendously, but now I can share it with all of you as well! I am so excited to be partnering with Prep Dish to offer all of my clients and followers a FREE two-week free trial (and who doesn’t like free??)
Prep Dish is a weekly meal plan subscription service developed by chef &
dietitian Allison Schaaf. She does all the planning for you- including easy-to-
follow shopping lists and prep-ahead instructions so you know what to prepare and when to prepare it.
Here are just a few of the reasons why I love Prep Dish:
– weekly meal plans delivered straight to your inbox
– delicious & easy “real food” based recipe that are always gluten-free
– dairy-free & Paleo options available!
– Prep Dish answers the dreaded question of “what’s for dinner?”
– FREE for 2 weeks!
(Start your free trial today! Just click here for details)
Prep Dish has allowed me to save valuable time in the kitchen because I have an easy-to-follow list that lists every detail from the grocery store to the dinner table. It allows my husband and I to eat nutritious, stress-free, tasty meals all week, and it has been perfect for our busy lifestyle!
I encourage you to try them out today!
As always, if you have any questions, feel free to contact me at info@rachelking.org.